How this restaurant has managed to get two Michelin stars is beyond me. Now, before anyone says that perhaps I just don’t get Scandinavian food, A) I am Scandinavian and B) I’ve had Scandinavian food that has been very good in other restaurants, so that’s not it. Also, I’ve been to around 40 Michelin star restaurants, so I do have plenty to use as comparison. The step from one to two stars is big, and a two-star-restaurant really should excel in many aspects. Unfortunately, Aquavit disappointed in all aspects, and I don’t think it’s worthy of any stars. Perhaps the inspectors were on too much (free) champagne when inspecting Aquavit?

From staff to the food, everything just seemed a bit ‘off’. Now, there we couple of members of staff who were friendly and good, but the rest just gave a bad vibe, like they didn’t want to be there, as well as giving a scruffy impression. The sommeliers knew their stuff about what they were talking about, however the actual wine pairing to our Seasonal Tasting Menu didn’t impress either. Overall impression was that service was sloppy. I had wine poured to a wrong glass (old, used one instead of the new, clean one), and the cutlery was always placed in completely wrong angles etc. It’s these kind of little things that should not be happening in a place of this calibre.

My prediction is that Aquavit will be losing it’s stars, they most certainly are not worthy of them. For me, they are amongst one of the three worst Michelin star restaurants I’ve been to, my husband thought the are in fact the worst.

For the first Amuse Bouche we were served a Swedish pancake and smoked salmon. It was ok enough in flavour, however not amazing, and was a little bit difficult to eat by hand, as it was quite a floppy pancake. We thought they’ll need to improve to be the required standard.

Second appetiser and ‘palate cleanser’ was mussel with seaweed broth. The broth was ok, but tasted quite bland. The taste of the mussel wasn’t great, and it had some sort of dry crumbly topping, which made it dry. It tasted somewhat weird and unpleasant. We didn’t understand how this was called a palate cleanser, which are usually fresh, light and sharp on the palate, as this was not that. My husband thought the mussel was awful.

The butter test was passed nicely, as the butter was fluffy and very soft. The bread however didn’t impress.

The first actual course of scallop and sea urchin had a really weird, terrible taste to it. My husband thought it was the worst scallop dish he’s ever had, and I wouldn’t be far behind him. 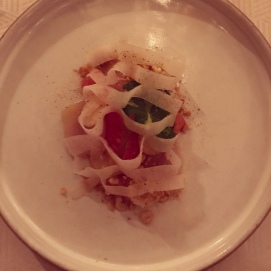 I got my hopes up when the Arctic char and kavring dish came. It was ok for me, however my husband didn’t like this one either. The dish was edible, however not worthy of two stars. A common nominator for all the dishes during the meal seemed to be a weird taste throughout, and there were too many pickled things that weren’t even pickled in a nice way. This dish was also lacking some attention to detail. I love a dish of salmon or fish from the same family, with some dill and wonderfully pickled cucumbers. The lack of attention to detail was that the cucumber had the skin on. Now, I can easily name places where the cucumber balls have been pickled better, are fully round balls and have no skin on them. Not impressed. 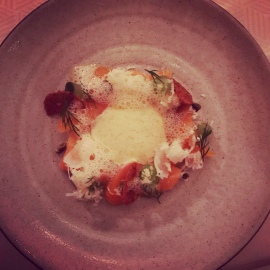 The Spanish turbot and sunchoke dish was the best of the meal at that point, however still not the greatest of flavours. The fish was cooked fine, it was nice and juicy. 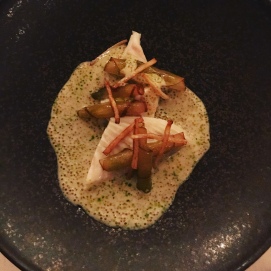 Next up was a mini slider isterband and apple. It was ok, however bland, and didn’t really bring anything to the meal. 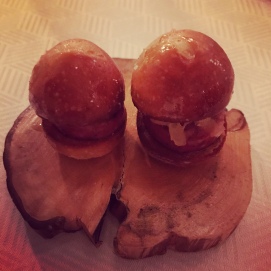 I was hoping the duck and honeynut squash dish was going to rectify the so far bad experience, but again left you wondering where the two stars have come from. The duck did have a crispy skin, which was positive. The squash disk was too undercooked and therefore unpleasant. Overall, again, the flavour of the whole dish was disappointing. 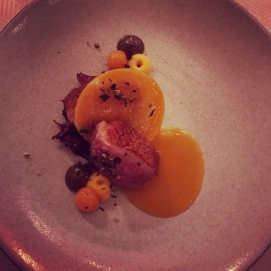 The palate cleanser of lingonberry and ginger was the best part of the dish. Lingonberries can be very sour, however their taste had been sweetened just right, and surprisingly the ginger went quite well with the lingonberry.

The wild strawberry and pistachio cake was unfortunately again somewhat bland. I was excited about the wild strawberries, as their taste is truly magnificent and sweet (I have picked these straight from the bushes in the past), but sadly they didn’t have any of the flavour I know these strawberries should have. And see from the picture yourself if you can spot why I would once again say they need to up their game when it comes to attention to detail. 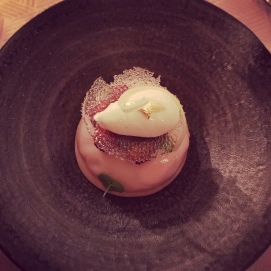