Reviewing the latest addition to the M restaurants, the Twickenham branch, is somewhat tricky for me. If, like me, you usually do fine dining more than anything else, this doesn’t really measure up to those standards. If, however, you prefer hearty meals in standard restaurants or pubs, you would consider M to be an upmarket place. Either way, you should be prepared for the pinch to your wallet. Most of my reviews will be of fine dining restaurants, so I think I have to use the same considerations, standards and ratings for comparison. Only very rare restaurants will ever get 5 stars from me. 4 is very good, 3 good and above average. 2 would have something missing and be below average, and 1 poor (I hope I will never have to give 1).

We had been to this restaurant once since it opened a while ago. We thought it was decent enough, although as mentioned above, not exactly the fine dining standard. This time, we decided to go for a Sunday dinner (however not roast, but a la carte). Restaurant was busier than we expected, but we had no problem getting a table. Couple of tables from us there was a group, and they had two big dogs with them. This was inside the restaurant, quite close to the open kitchen. If the place was a country pub this would be something you’d expect, however I was slightly uncomfortable with this, especially when one of the dogs started shaking it’s body. I was trying to calculate the distance and what amount of particles floated onto my food (I don’t really want to think about it too much). I do like dogs, just not in a supposedly upmarket restaurant.

Restaurant had run out of couple of options, one of them being what my husband would’ve ordered.

Apart from the bread, you have to pay for absolutely everything separately. Things got to a good start with the bread. One of the first things we always use for assessing a restaurant is the butter. You still sometimes get butter that’s rock hard, and almost impossible to spread. Perfect butter should be very soft, almost mousse-like. At the M, the butter was perfectly soft. For the wine we went for Argentinian Malbec, which was the restaurant’s own label, and decent enough.

For starters I had ‘Courgette’, and my husband had ‘Wagyu scotch egg’. I enjoyed my starter, which had differently prepared courgette: fermented, pickled, and courgette flower filled with cheese, coated with batter and deepfried.  The cheese was very light, almost foamy, and oozed out when the flower was cut. Coming from fine dining in mind, the plating was probably lacking a bit of finesse.  My husband’s dish was also nice, however spiced wagyu beef didn’t taste spiced at all. The beef itself was quite like tartare, so if you don’t like raw / medium beef you might want to reconsider your choice. The egg inside was nice and oozy, just as it should be. 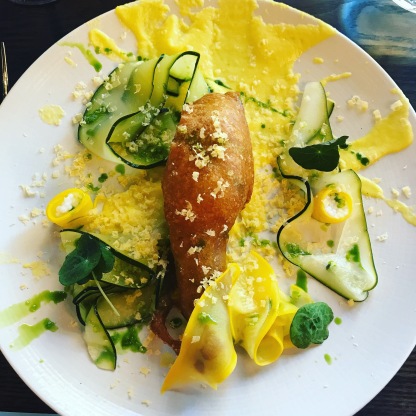 With the main, you must be prepared to order sides, as you literally get nothing else on your plate. We ordered spiced chickpeas, spinach and rocket salad, and triple cooked chips. I’m not too big a fan of chunky chips, so asked for skinny fries, but the only option was their chips. When the chips came they were actually ok for me as they were more like skinny fries than chips. The salad came without any utensils, so we had to try to get some out with our knives and forks. That might be awkward if you weren’t just with your other half. The chickpeas for me were slightly too tomato flavoured, not fresh tomato but tinned. They also didn’t appear spiced as promised on the menu. My husband liked them but I was disappointed.

The star of the meal without doubt was the meat. I had a fillet steak, and my husband had fillet medallions (as his first choice had run out). Both were perfectly cooked as requested, medium-rare. When I saw my piece of meat arrive I was thinking it wouldn’t be, as it’s very difficult to get a thick piece of fillet cooked right. We both ordered black garlic aioli as the sauce for the meat. I couldn’t really decide for quite a while what I thought of it, but I think in the end my decision has been that it’s not my thing. My husband did however like it, so it might just be a question of taste. 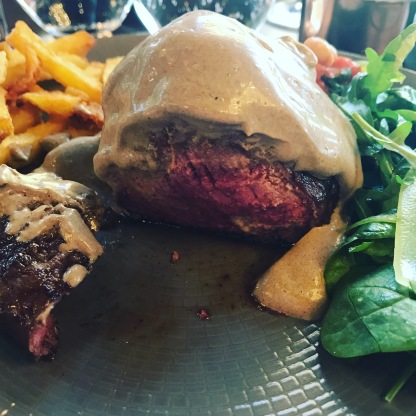 For dessert I had ‘bakewell tart’ and my husband had ‘pumpkin brulée’. I thought the cake was quite nice and moist. My husband liked his dessert. I would often order crème brulée in a restaurant, and I’m not sure I would’ve been happy if I had received that. I don’t think it was exactly brulée. 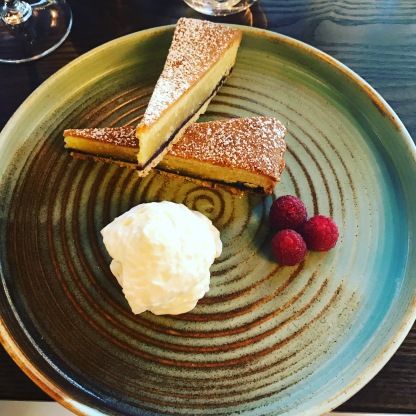 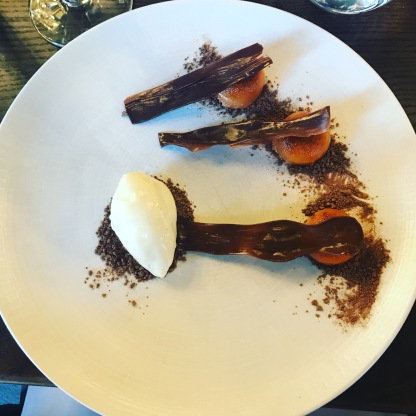 One of the serving staff made an insensitive comment whilst serving our food. It didn’t personally affect us, but would have potentially affected someone with a family member suffering from Parkinsons.

We asked to move to the bar with our remaining wine and water after finishing our meal, and it didn’t seem to occur to the staff to take our drinks, until we asked about it again.

The ladies’ and gentlemens’ rooms are supposed to have high-end hand soap. My husband came back horrified. What the bottle said, was the same fragrance as one of his shower gels from the same brand. The colour should be yellow, but was green, and smelled completely different. It was also foamy at the top, and appeared to be something like dish washing liquid. My thought following this is that if you’re lying about something like this, what else would you be lying  about?