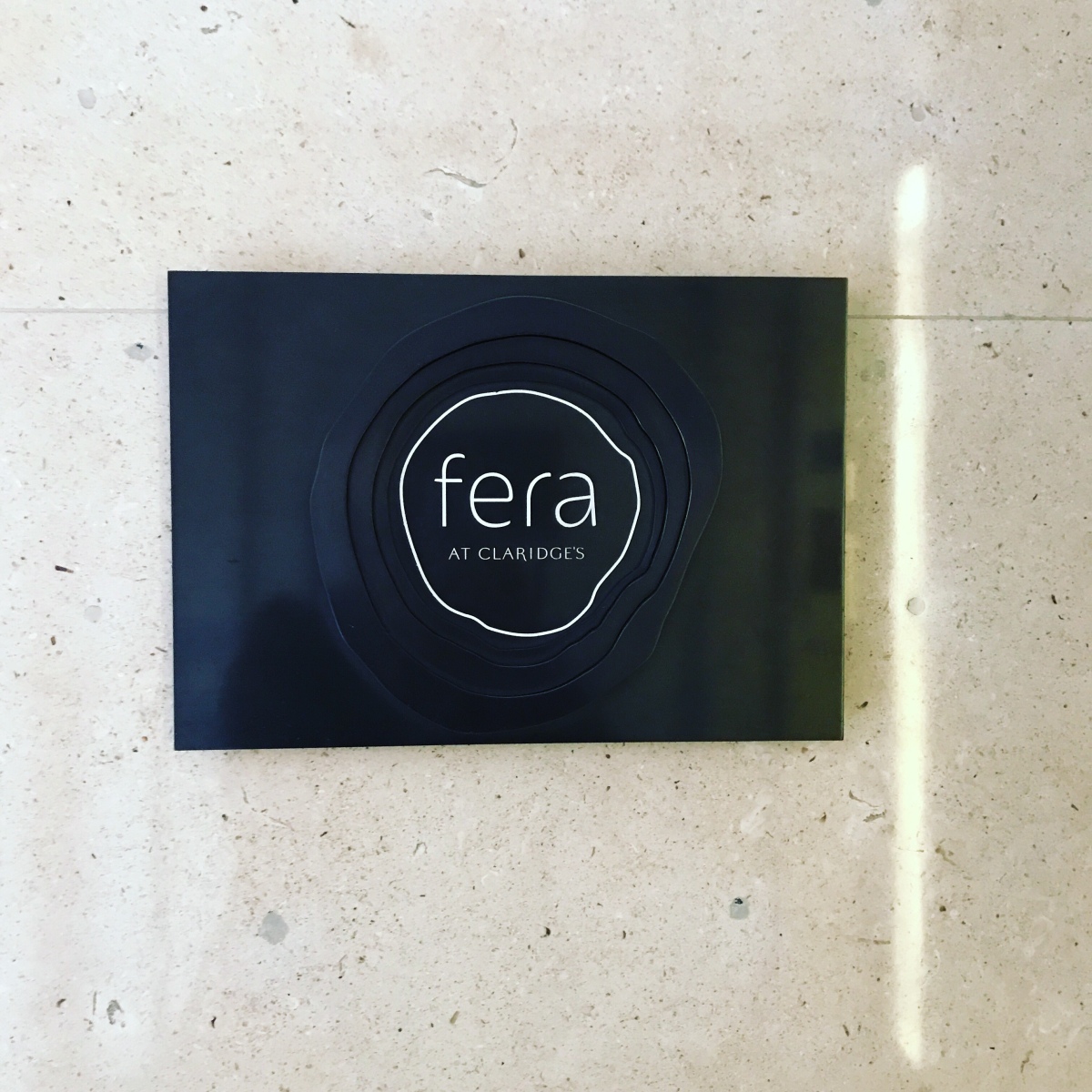 This restaurant is most of the time fully booked, and it’s easy to see why. As you step into the luxurious Claridge’s Hotel in Mayfair, in Central London, you can already get an idea what décor and ambience is waiting for you at the actual Fera restaurant. The food is worthy of their 1 Michelin star, with great attention to detail applied. For each course, before actually placing anything in your mouth, the food has already visually satisfied your tastebuds.

The overall experience was as great as we remembered from our last visit, however there were few things that appeared a little too salty to our taste. The new Head Chef Matt Starling has done a great job at maintaining the standards this restaurant had under Simon Rogan. Not to mention, we went on a Saturday between Christmas and New Year, and I was so pleased that our Tasting Menu didn’t have ingredients that were leftovers from Christmas meals, but something completely different.

Another thing to mention, that is a good example of the quality of the place, is that from on our booking we had had an offer for free glasses of champagne. The champagne itself wasn’t any cheap version, but Laurent Perrier (our favourite brand we often buy). The kitchen tour we had afterwards was really interesting, it was great to get some insight to their preparation process. The service at Fera was really good. The staff were very skilled at reading us, being formal, but also informal.

For bread we had rye and stout bread (my husband particularly loved this), as well sourdough bread, which I thought very tasty, more than at most places. And our first test of a place of the softness of the butter was passed by flying colours, however it was too salty for us.

For appetisers we had a wonderful chickpea and rosemary wafer with cream cheese and mustard vinaigrette (that brought nice sharpness) with edible flowers. Everything worked very well together, and was extremely pleasing to the eye.

The starters of stewed rabbit with lovage, and scallop with John Dory and smoked roe were served a little bit like appetisers. The rabbit was very juicy. It was coated with dried onion, and served with lovage purée. It was a little messy to eat as you ate it by hand and it was bigger than one bite, but the flavour was really good. I also loved the smokiness of the seafood ‘tart’. 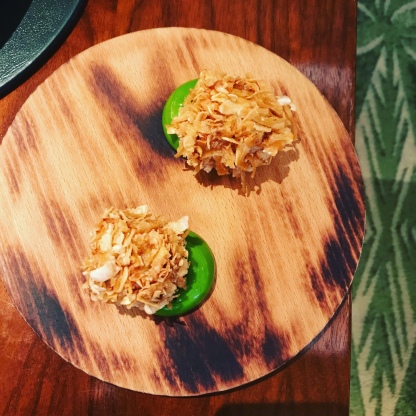 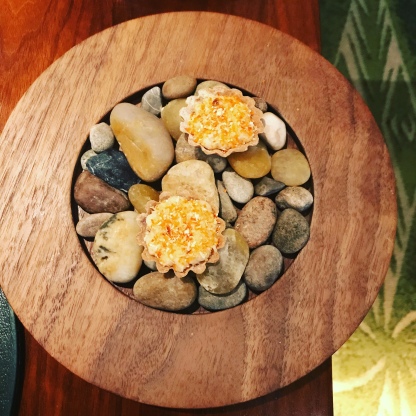 The second starter was beef tartare. It was very mild in flavour, but very enjoyable nevertheless. The whole dish was executed well, and all the flavours went really well together. We were also having the wine pairing for our menu, and were originally surprised to be served white wine with this course. The unexpected sharpness of the wine actually complimented the food extremely well. 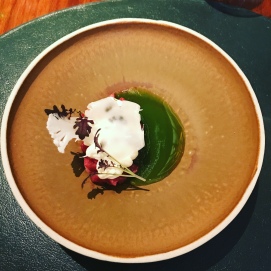 For the fish course we had brill. It was juicy, but for me perhaps slightly overcooked. Something on the plate was too salty for us. We came to a conclusion it was the broccoli purée. 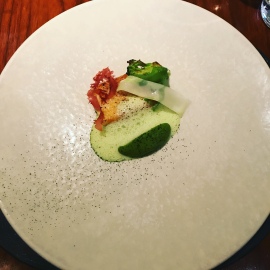 The main meat dish presented us with deer. I think this might be the best cooked deer I’ve ever had. As the meat of this animal is very lean, it can very easily become dry. Ours, however, were melt-in-the-mouth soft, tender and juicy. The blackberry element on the dish was powder, and it was also incorporated in the jus, however we felt it would’ve been nice to have couple of the actual berries on the plate, too. When the dish was served, all the other ingredients were hiding inside a king lettuce parcel. When you revealed what was inside the sight filled you with joy. Again, this dish, too, had something that was too salty. On this dish it was the mushroom purée. 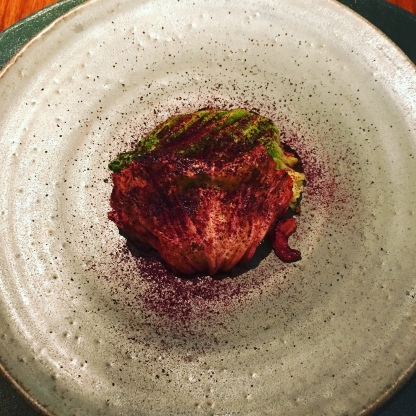 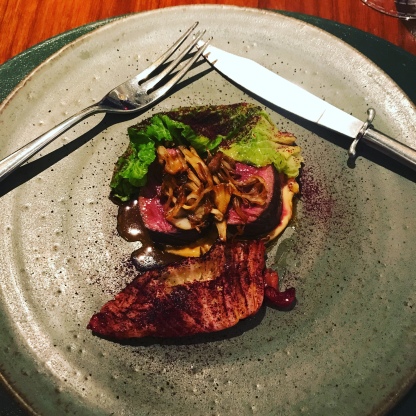 The first dessert, a little bit like palate cleanser but with less sharpness and freshness, was bergamot foam, parsley cream and honey cake. On it’s own, I wasn’t a big fan of the parsley cream, but when you ate everything together all of the flavours complemented each other really well. The cake was like the currently trendy dehydrated cake, with nice crunch to it. 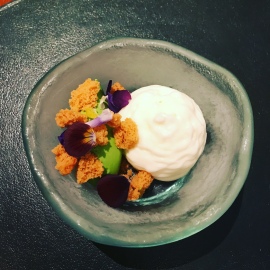 The main dessert of chocolate custard ganache, earl grey ice-cream, aerated milk cake and lemon granita was nice, however something didn’t entirely work for me. I think it might have been the ice-cream. Overall the dish was still nice enough. 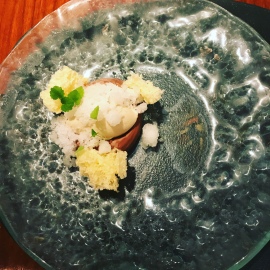 Petit Fours were nice, my husband in fact couldn’t even wait for me to take the picture until he’d already had one. 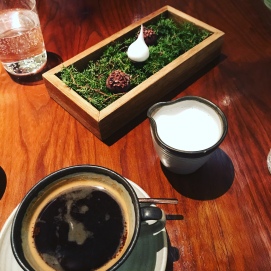