I’ve not really used pears in cooking much, but was recently inspired to have a go. I spent a long time looking at various recipes, and in the end combined a few. This dessert is perfect for this time of the year, with winter spices of cardamom and cinnamon. After poaching the pears the red wine mixture gets reduced to syrupy wonderfulness. I also think vanilla is better used in the mascarpone mousse, rather that the red wine jus. It’s pretty simple to make, and I’m pleased I made this, as I’ll for sure be making this again.

1. Peel the pears. Cut the bottoms off, and core them. (I forgot to peel them first, but it will be easier if you do it first).

2. Put the prepared pears in a pot, together with the cinnamon, cardamom, lemon zest (save the juice for later), sugar and red wine. Bring to boil, and simmer, covered, for 20-30 minutes, until soft.

3. Remove the pears, and boil the liquid,  uncovered, to reduce. During the boiling add the lemon juice and 1 tbsp of sugar. Reduce at least until half the original volume, the more you reduce the more syrupy and thicker it will be.

5. Pour the red wine reduction through a sieve. Put the pear and mousse on a plate or a bowl, and spoon some of the sauce over the pear. 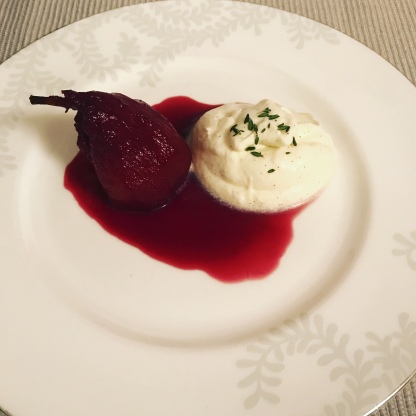 4 thoughts on “Poached pear with vanilla and mascarpone mousse”